The 47th Plenary Meeting of the International Cold Forging Group (ICFG) was held from September 21st to 24th, 2014 in Ankara (Turkey), hosted by Prof. Karadoğan from Metal Forming Center of Excellence (Atilim University). The Plenary Meeting was attended by 101 members and guests from 16 countries. 49 attendees were from academia and 52 from industry. The agenda comprised an Advisory Board meeting and a welcome reception on Sunday, subgroup meetings on Monday and the Plenary Meeting including the General Assembly on Tuesday. After two days of successful meetings with motivating discussions and interesting presentations, industrial visits provided an insight in the state of the art of Turkish cold forging industry on Wednesday.

The Subgroup Meetings started in the morning with a joined session to introduce the activities of ICFG and subgroups to the attendees. In addition, new guests had the opportunity to introduce themselves. All new guests were welcomed with applause. After the joined session the attendees split up into different groups. It was possible to choose between the subgroups ‘Process simulation’, ‘Tool Life & Tool Quality’ and ‘Aluminium & Lightweight’, as well as the topic team ‘Lubrication’ and the workshops ‘Servo Presses’, ‘Energy Efficiency’ and ‘ICFG 2050’.The results of each session were presented in a joined session.

The Plenary Meeting on Tuesday was opened by the ICFG chairman Dr. Hänsel. In the morning six invited keynotes were given on recent developments and aspects of cold forging. In the afternoon Dr. Hänsel opened the General Assembly and welcomed all attendees to Ankara. The ICFG delegates accepted the change of the membership status of Prof. Kuzman (Slovenia) to honorary membership, of Prof. Ruan (China) to emeritus membership and Prof. Landgrebe (Germany) to full membership. Within the Advisory Board of the ICFG, no changes of the composition were announced. The ICFG Paper Prize 2014 was awarded to Mr. Christoph Müller and Mr. Thorben Schiemann.

After two days of successful sessions with interesting presentations and motivating discussion, a day of company visits followed. The attendees had the possibility to choose between different tours. The first tour started with a visit of the Metal Forming Center of Excellence in the morning and on Wednesday afternoon the company ORS‐Bearings welcomed the ICFG delegates to their plant. The second tour started with a visit to Turkish Aerospace Industries and was also combined with a tour to the
Metal Forming Center of Excellence. The third possibility was a city tour of Ankara. The visits gave the participants an excellent insight into the Turkish cold forging industry and the history of Ankara. The ICFG thanked the companies for providing the possibility of visiting.

Within the General Assembly the dates and venues of the future plenary meetings were announced. In 2015, the Plenary Meeting will be hosted by Prof. Im from the Korea Advanced Institute of Science and Technology in Korea. The meeting is scheduled for September 13th to 16th, 2015 in Deajon, Korea. Dr. Lee presented the preliminary program.
The 47th Plenary Meeting in Ankara, Turkey gave participants the opportunity to exchange information, to continue cooperation and to create ideas for new research and development projects. The organizers must be congratulated on arranging such a varied program and on giving participants an impressive insight of Turkey’s industrial activities in the field of cold forging. 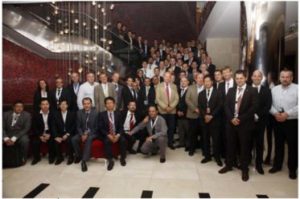 Participants of the 47th ICFG Plenary Meeting in Ankara, Turkey from September 21st to 24th, 2014

This website uses cookies to improve your experience while you navigate through the website. Out of these cookies, the cookies that are categorized as necessary are stored on your browser as they are essential for the working of basic functionalities of the website. We also use third-party cookies that help us analyze and understand how you use this website. These cookies will be stored in your browser only with your consent. You also have the option to opt-out of these cookies. But opting out of some of these cookies may have an effect on your browsing experience.
Necessary Always Enabled
Necessary cookies are absolutely essential for the website to function properly. This category only includes cookies that ensures basic functionalities and security features of the website. These cookies do not store any personal information.
Non-necessary
Any cookies that may not be particularly necessary for the website to function and is used specifically to collect user personal data via analytics, ads, other embedded contents are termed as non-necessary cookies. It is mandatory to procure user consent prior to running these cookies on your website.
SAVE & ACCEPT